Reach Our Facade Companies in London 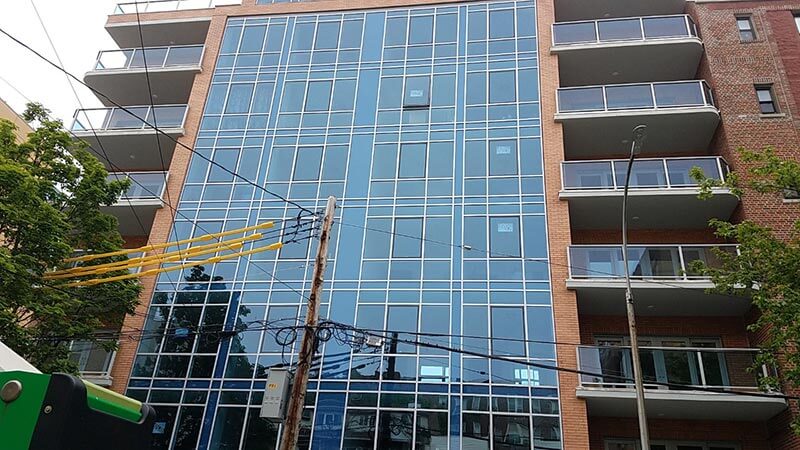 For more clarifications, you can contact us. Our expert team is ready to help you with any doubts.

Doorwins Group have companies within the group that take on curtain walling contracts in and around London. This is however a special request and needs to be specified and constructed by specialists, so the best way to order is to obtain a site visit by a specialist who can walk through the site and take exact measurements.

London and M25 area are easily covered by Doorwins Facade specialists. Our grouped companies are some of the best facade companies in and around London. We have 3 top facade companies in London that are the best in the Industry and can also quote with architectural documents via an email.

This product is available and for more information please contact our team.

A curtain wall is made of Aluminium and usually filled with glass, stone or paneled metal. The walling is part of the building structure, but no way is it used to support the weight of structure. Curtain walling became useful just after the military released rites of Aluminium use for the public just after world war 2.

Curtain walls range from straight design to bespoke architectural buildings making them a very clever design but can be very dynamic to build thus needs an expert to construct them. 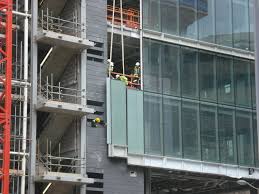 Fabrication of a walling can determine if it’s a stick system or modular engineered. The stick system is when the curtain wall is put together piece by piece and the glass panels are constructed just like a click in jigsaw, these are put together as the builders go at the actual site.

Modular systems are all installed and put together in a large warehouse very carefully transported to the construction site and placed within the building structure in one go were the modules mate together constructing one story high and one module wide to begin with and may carry on for more width and height.

Which systems are available in walling?

Whether the stick system is used or the single unit they both can be exterior glazed or internally glazed units. Internal choice allows for the glass panels to be installed from the inside of the structure but a down fall to this internally based system is that ‘’air infiltration’’ can be a major concern. Also, the project manager must take in to consideration for any major obstacles or access to the internal glazed walling.

External glazing for curtain walling is especially advised for low rise buildings and a preference for construction personnel were as high-rise buildings would prefer to keep internal glazing in case of maintenance and exchange of glass panels. The external system will require scaffolding surrounding the building or a swing stage hanging is required. Now days project managers intend on using double way curtain wall systems which can be accessed via the inside or outside which makes the maintenance much easier and safer.

Types of Glass or panels used on curtain Walling

Opaque panels include opacified spandrel glass, metal panelling, thin stone and many other materials even terra cotta or fibre-reinforced plastic.

Spandrel Glass can be monolithic, insulated or laminated. With the use of opacifies such as film, paint and ceramic frit, spandrel glass can be made opaque. Shadow boxing is also a method used to achieve the opaque effect.

Vision Glass is normally a fixed pane that normally are fitted into an internal frame that sits within the walling (a frame within a frame). This tough insulated glass will sometimes have lamination on either one or both sides of the window.

Metal panels come in Aluminium plate, steel and other non-corroding metals were the 3-layer method is used (like a sandwich 2 outer layers of metal and an inner layer of thin plastic). Some can consist of no inner sheeting and just the two outer strong metal sheets to form the fully finished panel.

Granite panels are also a type of panel used to fill inside the curtain walling and if done wrong can cause major constructional problems for the architect therefor builders use careful construction and adjacent elements such as cladding, roofs and the base of a wall are all considered by a doorwins specialist.

Pressure equalized rain screen systems are excellent water blockers that stop rain water and such from running over the barrier of a build. This type of system resists water passage within Curtain Walling, it carries a PE rain screen system design and the face of the Glass, glazing pockets and interlinked gaskets and seals form an air tight barrier. The external glass, glazing materials and Aluminium framing function to serve a rain screen which clears water away. Any minor bits of water that do get through are directed to the outside of a curtain wall which helps keep this type of system one of the most used.

Face sealed designs use a barrier wall which depend on continuous and perfectly placed seals in between the glass units and frames. Many argue that this system should be avoided and any construction that depends on ‘’long term’’ use of a seal of any sort is not the way forward.

Water managed systems appear to look the same as a pressure equalized system but in matter of fact there is no effort to create an air barrier for every glass unit. The water manager lets in a larger amount of water before weeping it away. It is way easier to gain a leak as there is no air barrier within this system which means water can travel much further vertically. Water managed systems rely largely on weeping water away unlike the weeping holes on a pressure equalized system contains which allows more air to circulate within the drainage mechanicals.

Thermal Performance of Aluminium and PVC

Overall thermal performance relies on many factors such as glazing panel function, frames construction quality and the perimeter. Curtain wall frame conductance comes down to the function of the frame material, geometry and warehouse fabrication or manufacture.

Because Aluminium is a metal with a very high thermal conductivity level other materials that conduct much lower levels are used. These materials consist of PVC, rubber, poly-uterine and polyester reinforced nylon. Aluminium metals placed internally move different to internal aluminium which causes polyurethane to break and shrink due to temperature difference and therefor Back-up mechanical attachment of the two halves of the frame is recommended to help prevent such matters occur. It is suggested to place incorporate separators on the curtain wall which can improve thermal performance.

How are Curtain Walls supported?

Curtain wall systems rely highly on the floor structures and framing when weighing the loads whether dead or live. The loads consist mainly of positive and negative wind loads and can also refer to a snow load, seismic loads and maintenance loads. When these loads come in to play the curtain wall will probably demonstrate some movement of the structure and this is a main reason to why the connections that anchor a walling must be designed to allow differential movement while resisting the loads applied.

Mullions of a stick framed aluminium curtain wall are built past two floor levels where one floor is used to act as an anchor by combining gravity and lateral as one and Vertical movement is purposely allowed to such a structure which provides complete resistance. Even the glass is installed in such a way that allows the glass to slide along special made gaskets so that the aluminium frame and glass can move as one. The only down fall is, movement of the glass within the frame and the movement forced in anchors tend to induce additional stresses into a stick framed system.

Unitized curtain wall systems allow the movement of the frame and different movement of the structure as the engineers place special joints between each of the curtain wall units. Due to being 100% bespoke designed this allows the architect to carefully engineer the movement process to a much more less aggressive one. unitized curtain wall typically consists of an assembly with three-dimensional adjustability and the anchors occur at the edge of a slab or spandrel beam. A stack joint is carefully designed to help resisting loads while the two floor anchor system resists gravity.

Mould growth can be accumulated by condensation moisture and liquid water which can cause a problem with IAQ or local building regulators, even leakage of both air and water can be a cause. This type of leakage can contain sealed for years and not appear to the human eye until deterioration and mould growth which can be a very costly repair.

Perimeter sealants, properly designed and installed, have a typical service life of 10 to 15 years although breaches are likely from day one just as any construction, so regular maintenance checks are required. Appropriate maintenance includes replacement seals and surface preparation.

Aluminium frames at doorwins are generally painted or anodized for long life and we expect the same from a Curtain Wall, fluoropolymer thermoset coatings which require periodic cleaning only are a great way to have good resistance and environmental degradation. With some surface preparation a recoat is also available for Aluminium frames and panes. Anodized aluminium frames cannot be "re-anodized" in place but are cleaned and already coated with such protection before the metal is put in to place at a building site.

Over exposure of seals and gaskets need regular inspections and a maintenance plan in place to help minimize water damage as discussed earlier. Frame seals should be covered and the glass seals need to be regularly checked too.

Betty loves to research the latest News and Newest styles being Manufactured in the double glazing world. She is up to date on the latest solutions and trade secrets in the Glazing Industry.

For more clarifications, you can contact us. Our expert team is ready to help you with any doubts.